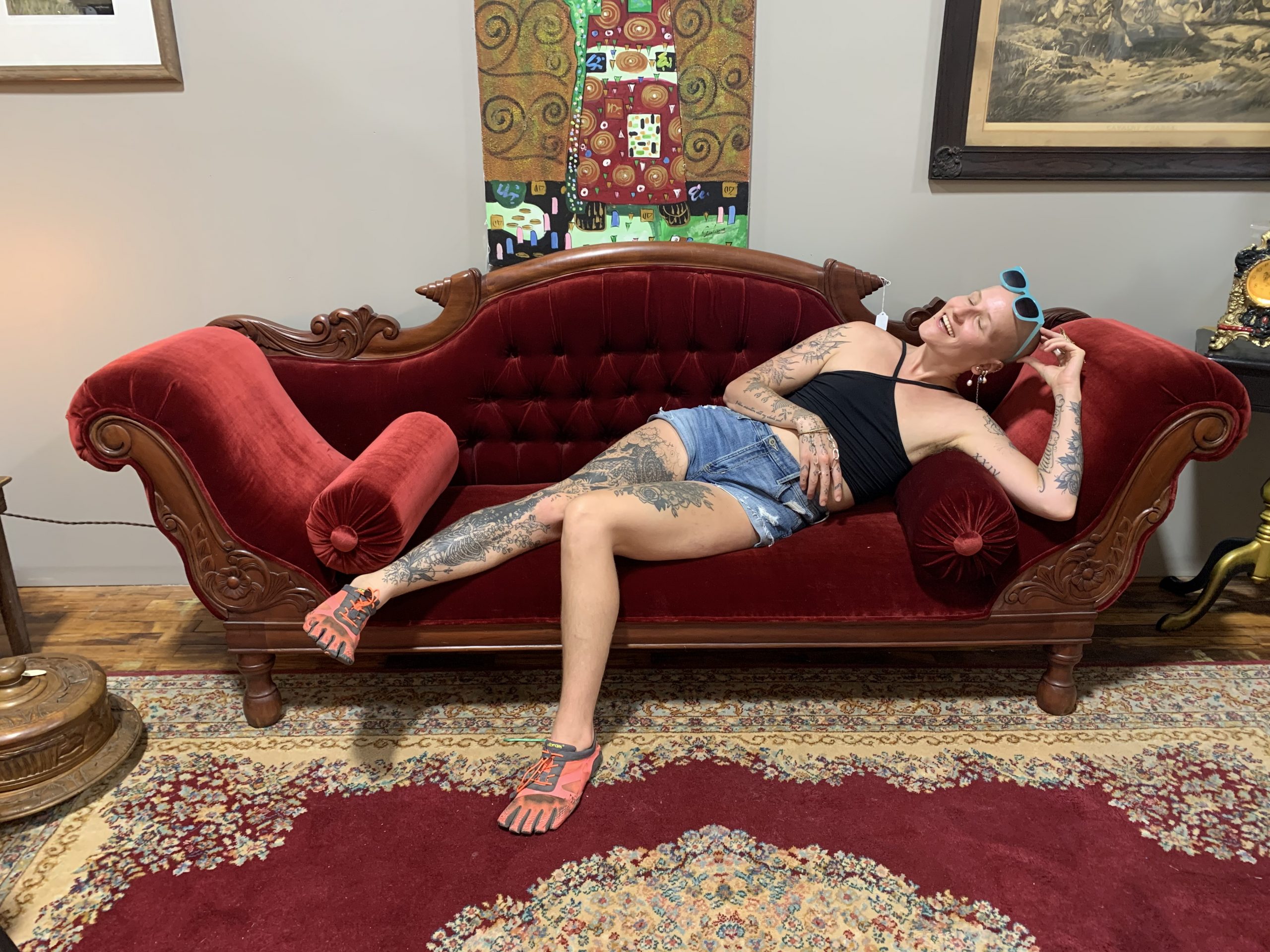 It’s pretty boss, if me lying on this vintage badass couch at an antique store is any evidence.

Those of you who know me in real life know that I have had really, really bad periods almost every month for the last 20 years (yeah you read that right, 20 freaking years).

These periods, which included heavy bleeding and immense pain, impacted my quality of life significantly. I essentially planned my life around my period. Nothing could be done on the first day of my period, and sometimes even the second day.

There were many occasions where I got trapped out somewhere—on the side of the road, behind a toilet at college, at work, you name it—where someone had to come rescue me, or I had to wait until the pain lessened enough that I could hobble to my car and drive myself home, throwing up and shaking the whole way.

Yeah. It was terrible. And I don’t even have endometriosis or fibroids.

I have wanted a hysterectomy since I found out they existed, but it wasn’t until I was 31 that I finally got one. I was looking forward to the procedure for a very long time, and now that I’m almost six months post-op, this is what life is like without a uterus.

No More Planning and Rescheduling

Like I said, I had to plan my life around my period. There were many occasions when I had to cancel on someone because I had my period. Whether it was friends, work, or a tattoo appointment, nothing could happen when I was in such pain.

It got to the point where I had to anticipate my period and just not plan anything for the whole week when I expected it to show up. That was very frustrating and annoying—it was like my life couldn’t happen because of this goddamned thing that had plagued me for two decades.

Now, I don’t have to plan tattoo appointments, vet appointments, trips, work, or dates with friends around my period. And let me tell you, it has been NICE. I went to New York City and Virginia Beach this year without worrying about my period, and it was bliss.

No More Worrying About Getting Preggers

My husband and I have done the fertility awareness method (FAM) for the last five years to prevent conception since we both don’t want children. I love the FAM and think it’s an excellent way to prevent pregnancy (or even get pregnant, if that’s what you want). But it was work.

I had to take my temperature every morning to see when I ovulated and stick my finger up my vag every day to check my cervical fluid and write everything down on a chart. Based on this information, I could tell when I ovulated and therefore know when it was safe to have sex and when it should be avoided at all costs.

It’s been really nice not having to take my temperature, check my fluid, or keep a chart on my nightstand for the last six months after five full years of doing that. There’s also no panicking after sex and thinking, shit, was that really safe?

Now, it’s impossible for me to get pregnant and I don’t need a chart, thermometer, or intimate knowledge of my cervical fluid to ensure I don’t have a baby.

The doctors could not figure out why I was in so much pain with my period. It typically only lasted for a few hours on the first day of my period, but they were an intense few hours, sometimes so bad that we had to call an ambulance.

I did not have endometriosis. I did not have fibroids. My uterus was unusually small. It appeared perfectly healthy when the surgeons cut me open and took it out.

After two decades of being in pain and trying many different remedies and working with different professionals, it appears that the cause of my intense period pain was Ehlers-Danlos Syndrome (EDS). People with EDS tend to have bad periods, including severe pain and heavy bleeding, for reasons modern science cannot figure out.

Needless to say, I’ve been enjoying not being in pain.

I have no pain. ZERO. I do not have cramps. I do not have bloating or bleeding (except for very occasional cyclic bleeding, which has been a complete joke). I am completely pain-free. It feels incredible and I wish I had gotten my uterus out a decade ago because I have spent way too much time being in pain.

Without pain, I am free to enjoy life.

No More Anxiety and Dysphoria

As you can probably imagine, I developed a lot of anxiety and dread around my period as a result of the intense pain, which caused me trauma I’m not sure I’ll ever be able to fully unpack.

On top of this, I discovered during the process of trying to get my hysterectomy that I do have gender dysphoria, so for the last year and a half with my period, I became increasingly aware of my dysphoria and my feelings around my period.

I don’t have anxiety around my period because there is no period. There is a part of me that thinks it may come back one day, but this is physically impossible. I’m just shocked that I get to live my life without a period and without pain, and that truth is still settling in.

My dysphoria has also improved dramatically now that I no longer have breasts or a uterus. I feel more at home in my body than I have ever felt, and this comfort and happiness have bled out into every area of my life, from my sex life to my daily existence (excuse the pun).

I also don’t resent or hate my body anymore after my hysterectomy, as I did for basically my entire life. The freedom that comes with not hating my body and feeling that my body didn’t align with who I was has allowed me to experience things without so much mental and emotional baggage, including sex, which has been incredible.

Although I do miss period sex from time to time (any other blood lovers out there?), I absolutely do not miss skipping sex because of terrible cramps, depression, and anxiety about getting pregnant.

I also used sex to help manage my period pain, which was also traumatic in its own way, but it was one of the only things that helped at the end. So enjoying sex because I want to have it and not because I’m in pain has been nice too.

So overall, my life has been insanely better since I got my uterus removed. I wish I had done it sooner, although it was hard enough as it was to get my uterus removed in my 30s, so I’m imagining I would have had an even harder time in my 20s.

Have you had your uterus removed? How is your life now compared to before? I’d love to hear about your experience!